I have gone running three times since my last race attempt nearly two weeks ago. I knew I was not crazy that day, something didn’t feel right. The first few runs only a few days after told me that I definitely needed to take more time off before I got back on some sort of schedule. I went for it again yesterday for a six-miler and I could tell the rest did me some good. The ankle issue that I was feeling was gone, the hammies and glute still feel a bit tight. Tonight I went to the gym with my foam roller to work out these extra kinks and then did a quick circuit workout (weights) followed by push-ups, ab work and stretching. Definitely no running tomorrow but I think I will be ready to get back out there this weekend.

The only worse thing than not being able to run is not being able to run when I am so stressed out. D says he doesn’t run cause he’s not happy, he runs because he is. I always thought that was a wonderful reason, but that isn’t always the case for me – sometimes, a lot of times, I run to work things out and to free my mind of excess clutter. Right now I’d say the weekend couldn’t get here any sooner.

Trying to stay positive during the first lap.

Javelina was not at  all what I had anticipated it to be. For nearly 365 days, I talked, thought and trained for it. I told everyone that I knew who would be there to not let me drop – no matter what.

What I didn’t anticipate on race day was feeling like I had a lead monkey attached to each leg. It’s not at all unusual to feel horrible for the first 5 miles in any run or race, but I eventually shake it off and feeling horrible soon becomes a distant memory. This was not the case on race day, a day I planned to run an average of 9:30…all day! 9:30 is such an easy pace to maintain for me — anything slower and it actually becomes painful, well on this day, it felt like I was on the tenth mile of a 6:30 pace tempo run. Not good. 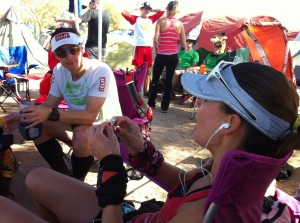 Trying to explain why I did not want to continue…

The way this course is set up, we run six 15.4 mile loops and then a smaller loop to finish out 101.4 miles. We alternate directions of the loops every other lap. It was on my first lap that I suspected something was off and it just never got better. As I headed in to finish my first loop, greeted by my wonderful crew (Andy and Ashley), I grabbed my new handhelds, a few bites of whatever and I headed in the opposite direction to start my second loop.

Around mile 20 in my second loop, I found myself struggling to even keep going, and that 9:30 pace was extremely difficult. Finally after around 22 miles, I got a very short second wind until the finish of the second loop.

Around two miles into my third loop, I knew I just couldn’t continue for an additional 60 miles in this condition. Even with all the runners passing me telling me I was literally a minute away from the first woman, I just couldn’t do anything more than what I was doing. About halfway through this lap I decided to run/walk. Running was too painful, my hip flexors were extremely tight and walking was just plain horrible in the dead of the desert heat. I had told myself I was done when I finished this lap, there was no way I could continue and I was in a lot of pain.

As I finished this third loop, I headed to my crew and none of them could accept my decision to DNF. I had accepted this fate well before I reached them, but all they knew was that I had told them to keep me going and to not let me quit.  As I sat in the chair, each one approached me with words of wisdom and some sort of encouragement to get me back out there. At this point, I was not at all concerned about my finishing time, I was looking at this from a standpoint that I knew I could not get through the rest of the race running. After a long period of time, and coaxing from everyone around, I hesitantly headed out for my fourth loop receiving a standing ovation from everyone around. Almost immediately I changed my mind and headed back to my crew. Realizing it would be a non-stop fury of everyone telling me I could still do it, I decided, “fine, I will go out another lap.” I ran for about 1.5 miles before I coaxed a guy named Van, who was walking, to keep me company for the rest of the loop.

Van and I, actually, it seemed like I was the only one talking, walked the entire loop. As the sun set, we finished our loops and I told my crew I was REALLY done.  After a half hour, I finally snuck over to the timing chip and called it. I was done. Not happy, not sad, just done for the day.

What annoyed me about my DNF was having to explain to people at the event why I felt this way. I knew why and even when I told them, I felt that all they saw was a quitter. To them it was more important that I continue on, even if it meant a 30-hour finish. I am sorry, but that is not an option for me. This was not my day regardless of the race distance. I refuse to say that the 100-mile distance got me again and I really don’t see the point of marching day and night to get a buckle. Good for you if you want to suffer and prove something, personally, I have bigger goals to achieve and that is to hopefully run a week after this fiasco instead of limping or being injured for a long period of time.

For a few days after the race I did find myself limping, my flexors hated me and my left ankle hurt(s). It doesn’t matter what you think, that is not normal. I made the right decision and I can’t wait to go running tomorrow. 🙂 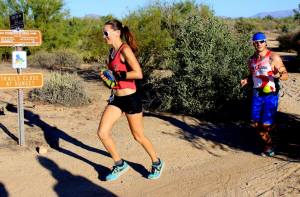 D and I heading into jeadquarters after the first loop. He is my rock and it was this race that brought us together. ❤

Pic of the Day: The Final Countdown

In only 32 days (1 year later), I will find myself back at THE place that sent me away, perhaps defeated for that day, but with a renewed spirit and soon-to-be best friend.

Going back will be an important milestone – a second chance to finish what I started, and of course, to celebrate one year with someone I absolutely adore and admire.

Having said this, it is ALL focus from here on out until race day. 30-day plank and ab challenge in full effect, daily foam rolling, early morning running, a full night’s sleep (gasp), and finally, putting together the perfect Halloween costume for the contest.  I want this race so badly and I am willing to be on my best behavior until then. I just know it will be worth it.

One Race At a Time

It’s been a couple of weeks since Javelina Jundred and I could still sit here with you and talk about it for hours if you’d let me. The whole experience was special and my heart is still fluttering with excitement and appreciation knowing that I will be able to get back out there and try again.

Sometimes I do question whether or not I could have continued on those last 9 miles but then I realize that a lot of time has passed since then and some of those dreadful moments are less vivid now including my feet which have pretty much healed up (except the loss of a toenail or two).  I have to remind myself that I did everything I thought I could do out there that day and then I move on. Over it.

Here with Javier P. at Wilson about to head down the Manzanita Trail.

I was able to spend the first week after the race working on personal projects and goals instead of running and I completely backed off after a 10 mile run/hike on part of the Chimera course with Ashley (my hip flexors weren’t having any of it).  I figured a few more days of rest would do nothing but help me recover more appropriately.  Finally during the second week I was able to get in a decent workout up to Mt. Wilson and felt confident enough for the coming weekend where I was able to get in three consecutive days of running and hiking, one of which would be a 12-mile trek up to Kaiser Peak and back in the snow! END_OF_DOCUMENT_TOKEN_TO_BE_REPLACED

Getting this little buckle took a lot of work!

Just getting into this post I  feel like I am all over the place with emotions and what I want to communicate.  All over the place in a good way.  So many emotions stemming from a long weekend after nearly completing my first 100-mile foot race in Arizona surrounded by motivating, inspiring and tough-as-nails competitors.

I was nervous going into this race — 100 miles is no joke (actually is it 101.4 miles); it’s far, it would be my first time and I had just realized after getting to my hotel that I lost a strap to my Camelbak which meant I would be stuck carrying one handheld for the entire race.  I also knew that running  a repeating looped course instead of a destination course would make for a long day.  Almost the entire race took place on Pemberton Trail, one 15.4 mile loop  in McDowell Mountain Regional  Park in Arizona that we would run washer machine style for a total of six times before completing a final 9-mile loop into the finish.  The elevation gain was minimal, about 5,200 ft and the terrain was a mixture of packed dirt, gravel-like sand (washout) and some technical rocky portions — all typical of trails that I have encountered so far.  On paper this course seems very easy, maybe that is why there was a large field of nearly 400 participants, hoping to finish their first 100 or set a new PR(?). Who knows but I had been warned by a few people that this course had a high DNF rate simply because it was underrated by participants to who thought it would be an easy finish (This year’s DNF rate was 56%!) . END_OF_DOCUMENT_TOKEN_TO_BE_REPLACED