Wow, time sure does fly when you are having tons of fun — I can’t believe we are almost halfway through the year already! Here is what I have been up to lately: 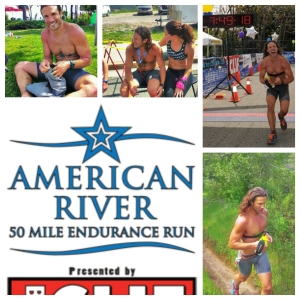 APRIL
I spent most of the month preparing all the details for the Leona Divide 50 which, at the end of the day, did not turn out so well for me.  I dnf’d at the mile 29 aid station due to urinary tract issues.  Leona was the race I was really  looking forward to and it didn’t have the ending I expected. In a weird way, I don’t and didn’t really feel hurt or sad or anything like that because at the time of making the decision to drop, I was sure I was making the right one. Trying not to put wasted effort in to an outcome that I cannot change has allowed me to restructure my goals and to move on.

Mid month I was able to crew/pace D for his 50-miler at American River. This was a big deal for D as he had been putting in tons of time and effort into his running program while at the same time flying tons at work (exhausting). This race would be his first “real” 50 and give him an opportunity to really put himself out there.  I was so happy that he wanted me to be his pacer but at the same time I was beyond nervous to run the last 23 or so miles with him. I knew I was fit enough to run with him but I worried that I could have a bad running day and I didn’t want that to interfere with his big day.  Luckily everything went well and we managed to get to that finish line in just under 7:50:00. In retrospect, I didn’t really “pace” him, I was just there for him in case he needed me and on that day, there wasn’t any other place I’d rather have been.  It was a good day.

I knew May was going to be a pretty quiet month because the only thing I had going on was the Gold Rush 100k where I’d be pacing/crewing D again. Again, this would be another important race for him as he prepares for SD100 coming up in June. Both American River and Gold Rush were just stepping stones in getting him to the start of that 100 next month. On this day at Gold Rush, I would be running that last 20 or so with him and I had spent the morning at the early aid stations to check on him and make sure all was good. It was a very hot day reaching into the the 90’s and I knew it would be a challenge for all. He looked really great all day but when he made it to me after running 40 miles, he had decided his race was over. He was concerned with  new knee pain that he had felt since the start of the race. I felt bad that he apologized when he saw me because I wouldn’t be able to run with him after a long day out there. I could have cared less about that — he was my concern that day and as long as he was OK, I was OK.  As of now, his knee is fine and shouldn’t be a concern next month.

After Leona, I realized that I didn’t really have any immediate races on my schedule, and since I was already in race shape, Ashley and I began to scour race calendars everywhere. Unfortunately there weren’t any races that  would fit into my schedule with my current commitments so I thought I would look for a marathon.  I did this for a few reasons — one was because of the horrible tragedy that happened at Boston, and the other was because I felt like I needed more structure and I needed to get back into a real rigid training schedule. Every since I started running ultras, I had become kind of lazy and I could actually get away with it. I didn’t like that. My hopes are that I will have 16 weeks of marathon training, race, and then slide back into the ultra scene with that same marathon training mentality.  With ultras I don’t worry about missing one day, two days or even three days of running because I figure I can just make it up on the weekends with a longer run. With marathon training, you can bet that I will NOT miss a track/speed/tempo workout because I know that it WILL affect me (mentally if not physically).  The marathon I chose to run is Santa Rosa Marathon on August 25th and I am beyond excited.  Already two weeks into the training program and I feel like I never stopped training for them, it feels so natural to be back at it. It’s a great feeling.  Note: I will be running a few 50k races between now and then (Marin Ultra Challenge and MAYBE Mt. Disappointment) but they will not be my focus.

This entry was posted on May 20, 2013 by tracebee. It was filed under Uncategorized .