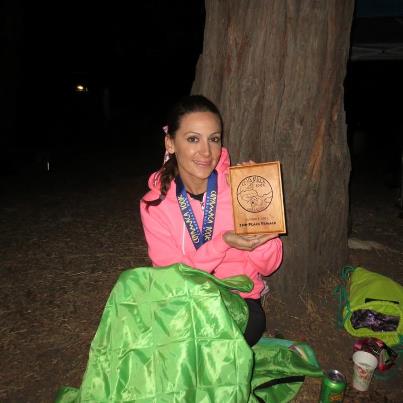 Cuyamaca 100k in the books and I am relieved to put it behind me because I had a lot doubts since I had been a major slacker lately, running once, maybe twice a week for the longest time. I was however confident with my knowledge of the course, having completed the entire course between two previous training runs and I knew what to expect. The whole course consisted of three separate loops, all returning us to the start area with a total elevation gain of 10,900. The first loop was around 30.5 miles and took us up to the top of Cuyamaca peak before heading back down to camp. I found this to be my favorite loop even though I had previously thought it would be the worse based on the peak climb from my training run. I had decided before the race that I would not use my Garmin until I got to the last loop since it would probably die early in the race and because I did not want to know my pace/time/distance so that I could just run by feel. My plan was simply to run when it felt good and to walk when it didn’t. There was a section early on in the race before the aid station where we were able to see the lead runners swing by. We had a great field of women — Keira Henninger, Ashley Nordell and Amy Sproston and I was excited to be able to see them in action. I did run into Keira a little bit later, I knew something must have been wrong for me to be near her – she said her achilles was acting up and she would drop as soon as she got to the next aid station. She was very nice and encouraging, also reminding me to make sure I take my salt tabs and to eat fruit at the aid stations. A few miles later I saw Amy at the Burnt Pine ‘T’ Intersection coming from a direction she should not have been, she told me she had taken the wrong turn for some time and she quickly headed back up with the rest of us (quickly passing us of course). I remained was very patient getting up to the peak, reminding myself that I had a near 5-mile downhill reprieve after getting to the top and then I could get to my drop bag to lance my blisters and change my left Injinji sock. The clock was showing 5:38-ish after finishing this first loop, close to where Ashley A. had predicted. She predicted 6 hours at the half and 12 total to the finish. I thought 14 would be more realistic because anything could happen in the next 30.5 miles! Unlike the first loop where I was able to run and chat with a few people, I found myself alone for pretty much the rest of the race. Lucky for us it didn’t get too hot, and I kept thinking about the advice Michelle Barton had given me the day before about taking salt sticks every 45-1:00, something I rarely used during my long runs. She was sweet enough to call me to check on me, give me last minute advice and wanted to know if I had any questions she could help me with before my big day. I listened to her, taking more salt sticks in one day than I have ever taken in my entire life! I have to say though, between them, a lot of fluids, gels and bars, I never felt my energy levels decrease. I felt pretty steady almost the entire time. I felt really strong with the exception of my sore throat and phlemy cough that I woke up with on race day. I found myself having to walk more often in the second and third loops because of the inclines and rocky terrain and I kept talking to myself, I don’t think I’ve ever talked to myself as much as I did yesterday. Over and over again, “It’s OK to walk Trace, you are going to walk because getting to the finish line is more important than your finishing time.” It started to get really cold too – lots of headwind and I knew I was developing a major cold and I was worried it would get worse if I didn’t get warm soon. With 11 miles to go, I reached the second to last aid station at Sunrise and found out I was the second F, apparently Keira and Amy had decided to drop. Still, I was kind of in shock, second F? Really? I found myself totally recharged and I finally began calculating my splits to see if I could get to the finish before 6:30 pm, around 12 hours. It seemed realistic but if I kept having to walk, I would cut it very close. I was able to get the last 18 mile splits on my watch with the last four being 9:34, 8:54, 8:14 and 9:16. As I came in to the finish, the clock showed 11:42:59, I was second F and 10th overall. I was completely satisfied with my performance and wouldn’t have done anything differently during the race (well, I did wish I had a good camera with me). I was happy but I wasn’t sure how I felt about this race distance. The only thing I knew for sure was that the stars aligned perfectly for me and I didn’t want to screw things up by going into Chimera (100 mi) with a crappy training regime and worried mind. I know things will get bad out there and I hope that when they do, they are things that are totally out of my control — I don’t want to contribute to that hurt by doing the wrong things in preparation.

Made this shirt the night before the race and I loved it! I couldn’t express it more clearly!

This entry was posted on October 8, 2012 by tracebee. It was filed under Race Reports and was tagged with Cuyamaca 100k.